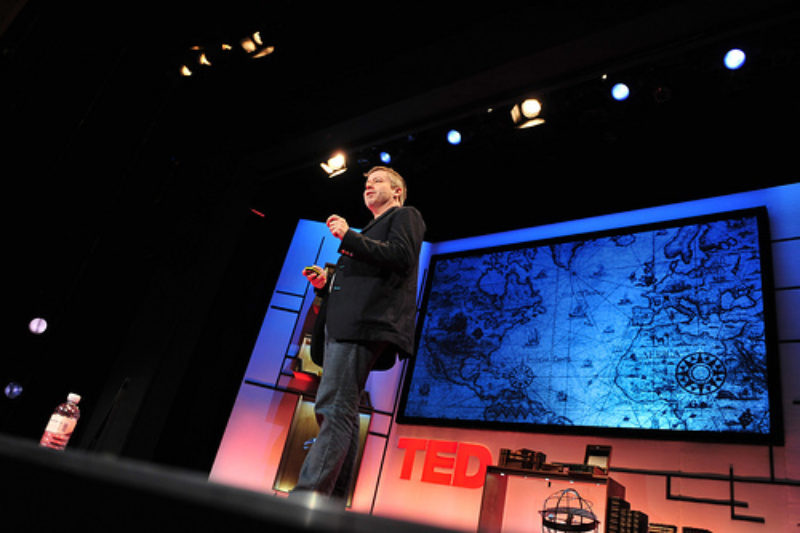 It is just a week since TED Global finished I am only just now clearing my brain enough to be able to process some thoughts about the event. I am a TED junkie and the Oxford version did not disappoint. If anything it was a more intimate version of Long Beach with just as high quality content and the added advantage of a beautiful college town as the backdrop.

In the past few years TED has struggled with the 'D'. Many of the design presentations have come across as somewhat pretentious or ephemeral. At Oxford this trend seemed to get reversed. Putting aside my own talk, which I will leave you to judge for yourselves when it goes up on the TED site, there were several which intersected with the idea of design thinking in interesting ways.

In the very first session philosopher Alain de Botton talked about the dangers of materialism and meritocracy, questioning some of the fundamental tenets of our consumer culture. This talk is already up on TED.com.

Stephan Sagmeister told us about why he closed his design office for a year and headed off to Indonesia for inspiration. He has this wonderful concept of taking the time normally spent in retirement and inserting it into his working career in the form of sabbaticals.

Jonathan Zittrain talked about the power of the internet to promote 'kindness', the participation of strangers in actions that benefit others. Perhaps not a new idea but he delivers the argument powerfully. It probably comes from him being a lawyer.

Rory Sutherland of Ogilvy delivered an hilarious talk on the value of perception over reality. He argued that much of what we value in the world is nothing to do with material goods and that if we are to have economic growth without destroying the planet then focusing on perceptions and the intangible will be a necessity.

Mathieu Lehanneur delivered a more conventional TED design talk made interesting by his unique exploration of the intersection between science and design.

Rebecca Saxe talked about breakthrough research into the right tempero-parietal junction which is the part of the brain that enables empathy. It seems as though this facility can be effected by outside magnetic stimulus. Her examples showed how subjects' moral judgments could be negatively effected by interfering with this area. Perhaps in the future she will come up with ideas about how to stimulate it to increase empathy.

Paul Romer, the Stanford economist, proposed the idea that city states are the perfect vehicle for creating systemic change. They are small enough to be able to change the rules and big enough to have an impact. He used Hong Kong as an example of that happening historically. He proposes building new city states in countries where it has proved impossible to change the rules and behavior of society to create economic improvements.

A wonderful example of design thinking at its best was presented by Marc Koska who has developed a disposable syringe that cannot be used more than once so eliminating the huge issue of diseased transmitted through the reuse of syringes in developing countries.

William Kamkwamba first wowed the TED audience in Arusha with his story about working from library books to design and build a windmill for his family to power their home and later irrigate their fields in Malawi. He is an inspirational example of how design can improve lives.

Ross Lovegrove returned to design in its most iconic sense - beautiful objects created by a maestro, but there is no doubt he knows how to manipulate form in extraordinary ways. Unfortunately he is not so good at planning an 18 minute talk and so ran out of time just three quarters of the way through.

Eric Sanderson described his Mannahatta project which used an old revolutionary period map of Manhattan to create a model of what the island was like before Europeans arrived. He went on to show how we could rethink the city to create an amalgam of the modern megalopolis and the ancient natural environment.

Somewhat on the same theme, Carolyn Steel talked about how pre-industrial cities evolved around their food supplies but that all got lost after industrialization. I found it inspiring to think about how we could design cities around food again.

Bjarke Ingels of Danish architecture firm BIG showed a series of exciting projects that seemed to me to be all about people and stories. Some very adventurous ideas got built because the stories made sense. A very refreshing change from previous architecture talks at TED.

The last design thinking related talk of the conference was by Dan Pink, author of A Whole New Mind and Free Agent Nation. Dan is writing a new book on the scientifically proven point that intrinsic rewards are far more effective than extrinsic rewards for motivating creative, innovative behavior. Of course anyone who has run a creative organization has always known this but what Dan will no doubt do is get through to the 99% of leaders running companies who still believe that the carrot and the stick is the right way to promote innovation.

This is a long list and it will be a while before all the talks are posted but I recommend you keep your eyes open for them. I will do my best to post reminders as they become available.